“The U.S. Supreme Court and virtually all state courts have recognized that the police powers of a government to impair contractual obligations for a higher public good, the health, safety and welfare of its citizens and its continued financial survival, cannot be waived, divested, surrendered, or bargained away.”

“Illinois was the last of the four states not permitting public pension reforms. In a series of Illinois Supreme Court decisions in 2014, 2015 and 2016, Illinois stood singularly against any modification of public pension benefits that would diminish or impair benefits of current employees and retirees. == we need to change that! Illinois must reform to remain a functioning state.”

From Wirepoints, June 12, 2019 “What’s clear is that, contrary to persistent claims by public unions, the Contract Clause and the rest of the United States Constitution do not spell doom for addressing our pension crisis through a constitutional amendment. Rhode Island indicates it would work.”
Read the full article: https://wirepoints.org/rhode-island-supreme-court-shows-illinois-the-way-on-pension-reform/

Home Values / Property Taxes / Pension … see how they have changed over the past two decades.  Illinois Policy has an excellent analysis of where the money has gone.

It has links to the top 200 pensions for each of the statewide pension funds.

For the vast majority, their lifetime contribution covers less than 10% of their estimated lifetime benefits.

I have several neighbors who are are afraid, that if Illinois touches anybody’s pension that they  could loose their own.    First let me say

DON’T PANIC!
No one will take your modest pension

We can change pensions going forward, for new employees with legislation.  However, any modification to the  already promised pensions requires negotiation, the legislature placing an amendment on the ballot and the voters approving it.

Take a look at these top pensions.  Can you justify raising taxes on the working poor & middle income folks to fund these?  Will you be willing to make small changes now, in order to avoid a total collapse?

Starting at taxpayersunitedofamericaorg/items-of-interest/11th-annual-report-illinois-state-pensions and clicking on the reports for each of hte state-run pension funds, we find the top few state pensions are all for retirees in the State University Retirement System (SURS)

According to the US Census 2017 data for Illinois:  Bureauhttps://www.census.gov/quickfacts/IL

And their state income tax went up last summer so that all pensioners can continue to get a 3%  compounded COLA (Cost of living allowance), including those receiving pension well in excess of the median family income.

Jeanne on the House floor

We need to have the discussion.  We need to find a way to ensure that pensions will be here for years to come while still providing state services and without chasing the taxpayers out of the state.

How is it fair that when a
teacher with 30 years of experience with average earning of $102,896/year
retires with an average starting pension of  $68,556/year …
gets a 3% increase every year… COLA

while the new teacher who replaces her
averages less than $49,464/year* and
will have a tax increase to pay for the retirees COLA.

* $49,464 is the average for teachers with less than 5 years, new teachers are likely lower

How much has District 200 been paying for superintendents over the years?

Note: Curley was an acting Superintendent. 1999 to 2012 data was downloaded as excel files from the “Family Taxpayer association” website. 2013-2015 was found on openthebooks.com
The inflation calculator is usinflationcalculator.com/ (based on federal government statistics.

Dr. Catalani’s contract called for end of career salary spikes of 20% per year compounded for 3 years.  When he turned 60, his 3% compounded annual COLA (cost of living adjustment) kicked in.
Illinois taxpayers are paying for Dr Catalani pension ($293,220 in 2015) and District 200 is still paying for his medical insurance. 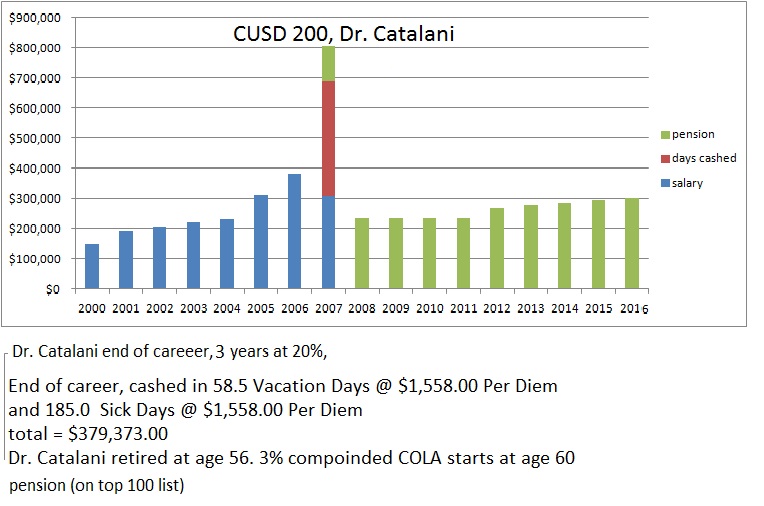 Superintendent, Brian Harris abruptly left Wheaton-Warrenville, CUSD200 on May 29, 2014 to take over as superintendent of Barrington Unit District 220. As a result Harris’ base pay went from $219,370 to $260,000. A year earlier, on May 28, 2013, with three years left on his on contract, Harris had received a new five-year contract with a $20,000 base salary increase. When Harris announced his departure, he had served CUSD200 for four years and still had more than four years left on his five-year contract. CUSD200 forgave Dr. Harris’ $40,000 get-out-of-contract-early penalty in exchange for Harris recommending his own replacement.

Then look at retiree data.

This tells us a couple things.

From page 100 of the pdf (active teachers salary chart)

From page 109 of the pdf (retired teachers pension chart)

Each household in Illinois now owes more than $27,000 in state pension debt.  Pension payments are now crowding out other government services as the potion of the state general fund has risen from less than 3% in 1996 to almost 25%.

The Illinois Policy Institute does a nice job of explaining it. illinoispolicy.org

Many of these people will receive more in retirement than they did while working.   The system is unsustainable.