On June 28, 2016 I, Jan Shaw, sent a FOIA request to CUSD 200 asking “How much money has CUSD 200 spent on celebrations for the adults (not students) in the past three years? (July 1, 2013 to June 30, 2016)” and received a response on July 1.  Then I spoke out during public comments at the Board meeting on July 13.  I suspect the board was unaware of how much this entailed as I found none of it itemized in the monthly report of bills paid.

While reading these examples, keep in mind that according to the Illinois Constitution “Public funds” are to be used only for “public purposes.” The purpose of Public Schools are to educate the children. How do parties and gifts for the adults educate the children?

SECTION 1. GENERAL PROVISIONS
(a) Public funds, property or credit shall be used only for public purposes.
(b) The State, units of local government and school districts shall incur obligations for payment or make payments from public funds only as authorized by law or ordinance.

The grand total spent by the district (not including what the schools, the teacher’s union,  or the PTAs spent, and assuming Dr Rammer didn’t miss anything) for three years of “celebrations” was $65,707.

The cost of the meal:

There were attendee lists for “Honor Tea” celebrations in May 2014 and May 2015.  They honored retirees,  and 15-year and 25-year service anniversaries.  But, no invoice for the Tea’s.  Not sure where they were held, how much they cost or who paid for them.

In May 2016 there was a “Awards Reception” at the Marriott in Naperville.

The menu consisted of:

Total cost: $13,050.33 The district paid $5,500. The remainder was picked up by the Wheaton Warrenville Education Association – the teachers’ union.

There were several Edible Arrangements for individual staff members – 2 examples:

In Nov 2015 There was a Blue Ribbon Breakfast at Arrowhead Country Club. It was a recognition program for the Emerson and Longfellow Elementary School staff for being selected as Blue Ribbon Schools by the United States Department of Education.  The district paid $200.00 for 80 corsage/boutonnieres for the staff.

There were Sympathy Flowers.  This one for a board member:

Flowers for individuals with no obvious reason 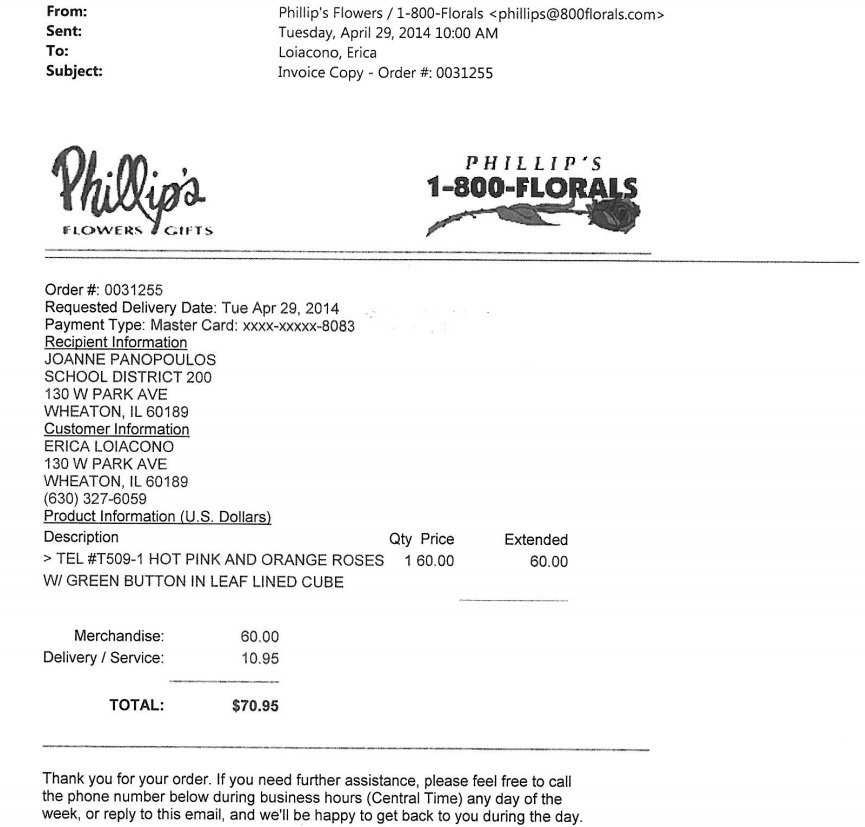 And MORE – What is the Public Purpose?